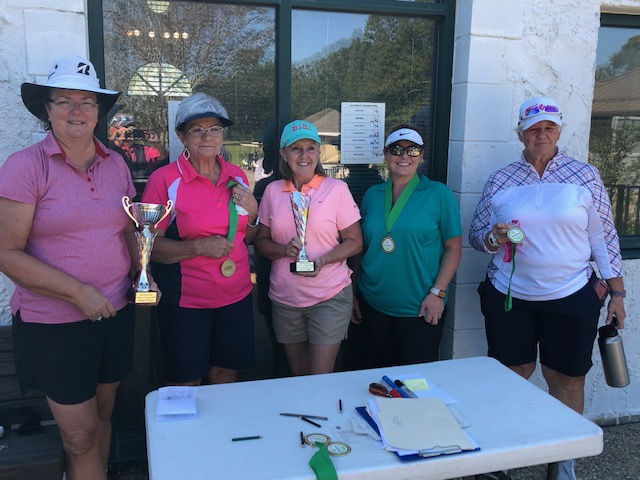 Macias launched a huge drive on the 10th hole and made another birdie to draw within two strokes. Harrison managed to keep Macias at bay until the 16th hole where she buried against the lip of a bunker and made a double bogey.  But Macias gave back a stroke with a three putt on the 17th green.  Tied coming into 18, both missed the green short and yet either failed to get it up and down for a par.

Tied after regulation, they proceeded to the 10th hole for a sudden death play-off.  Harrison drove down the right side of the fairway leaving herself a difficult approach, while Macias launch a booming drive that nearly reached the green.  Harrison took her medicine and left her approach just short of the green while Macias chipped to gimme range to make a birdie and thus the title.

In the Net division, Ginger Covington knocked down a difficult short putt on 18 to take the title.  Actually tied for the Net lead after 18, Covington won the scorecard playoff against both Reba Wheeling and April King.  Their net scores were a 67 on a challenging cool afternoon at Webb Memorial Golf Course.  Rounding out the top 4th spot was Suanne Seefield with a net 68.  A low gross prize was awarded to the Net Division and was taken by Donna Ashmore with an 81.